In a bid to establish effective legal instruments to secure the safety and stability of the nation’s financial system, there is a need to closely examine enacting laws with a view to harmonising the positions of the Nigeria Deposit Insurance Corporation (NDIC) and the Central Bank of Nigeria (CBN) in the NDIC Act 2006 and The Banks and Other Financial Institutions Act (BOFIA) 2004. The NDIC Managing Director/CE, Umaru Ibrahim said this as part of the Corporation’s presentation during the Public Hearing for the Amendment of the BOFIA Act 2004 towards the Repeal and Re-enactment of the Bill to BOFIA 2020 at the Public Hearing organised by Senate Committee on Banking, Insurance and Other Financial Institutions at the National Assembly in Abuja. 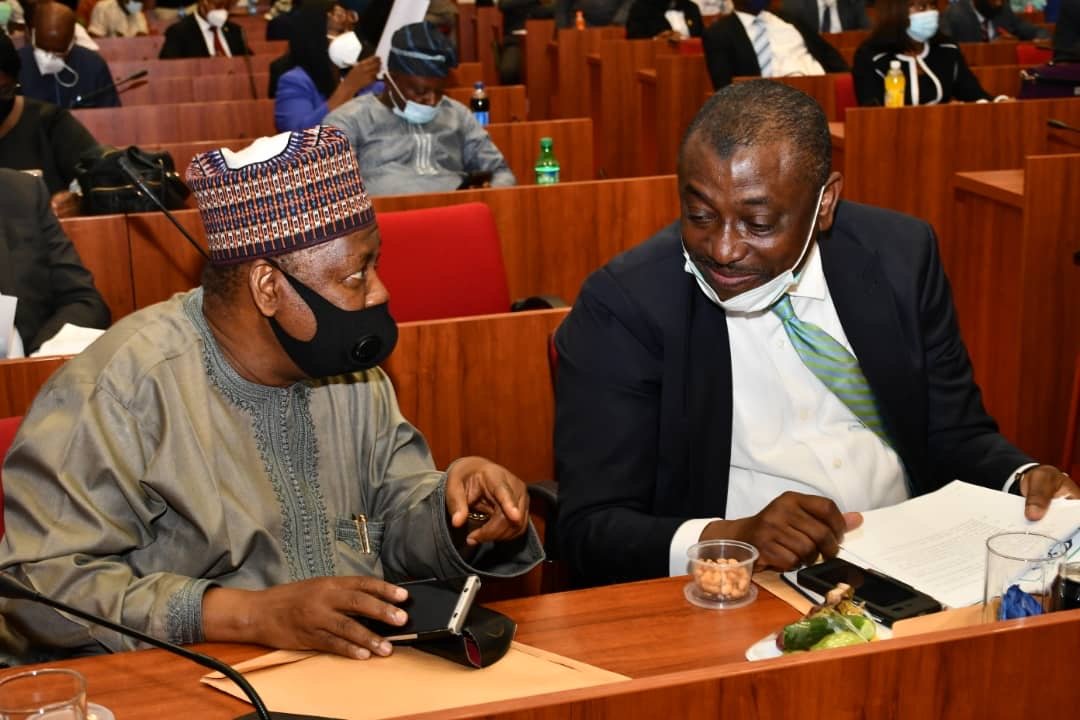 Nigeria Deposit Insurance Corporation (NDIC) MD/CE Umaru Ibrahim in a chat with the CEO of Nigerian Security Printing and Minting, Abbas Masanawa during the Public Hearing on the amendment of Banks and Other Financial Institutions Act 2004(Repeal and Re-enactment Bill, (BOFIA) 2020 at the National Assembly, Abuja.

The NDIC MD/CE explained that variances in the Bills that may be perceived as overlapping mandates between the NDIC and the CBN should be clarified in order to avoid any ambiguity in the laws governing their operations and should be reflected in the BOFIA 2020. This, he said was specifically critical in the area of the resolution of failing banks where the NDIC should be recognised as the primary actor in the resolution process while the CBN intervenes in the event of systemic crisis. He also expressed the need for the Corporation to be involved in the process of licensing banks in collaboration with the CBN in order to ensure the necessary fit and proper checks and to establish clearer assessment of the status of financial institutions before licensing. He also noted that the bill seems to suggest the option of the appointment of other entities in the liquidation of failed banks adding that the Bill should be amended to reflect the NDIC as the sole liquidator of failed banks based on the Corporation’s core mandate of Bank Liquidation. He said, the clear delineation of roles between the NDIC and CBN would strengthen the legal framework and contribute towards effective and efficient collaboration in the supervision and regulation of the Banking Sector.

The highlights of the NDIC presentation focused on the following areas;